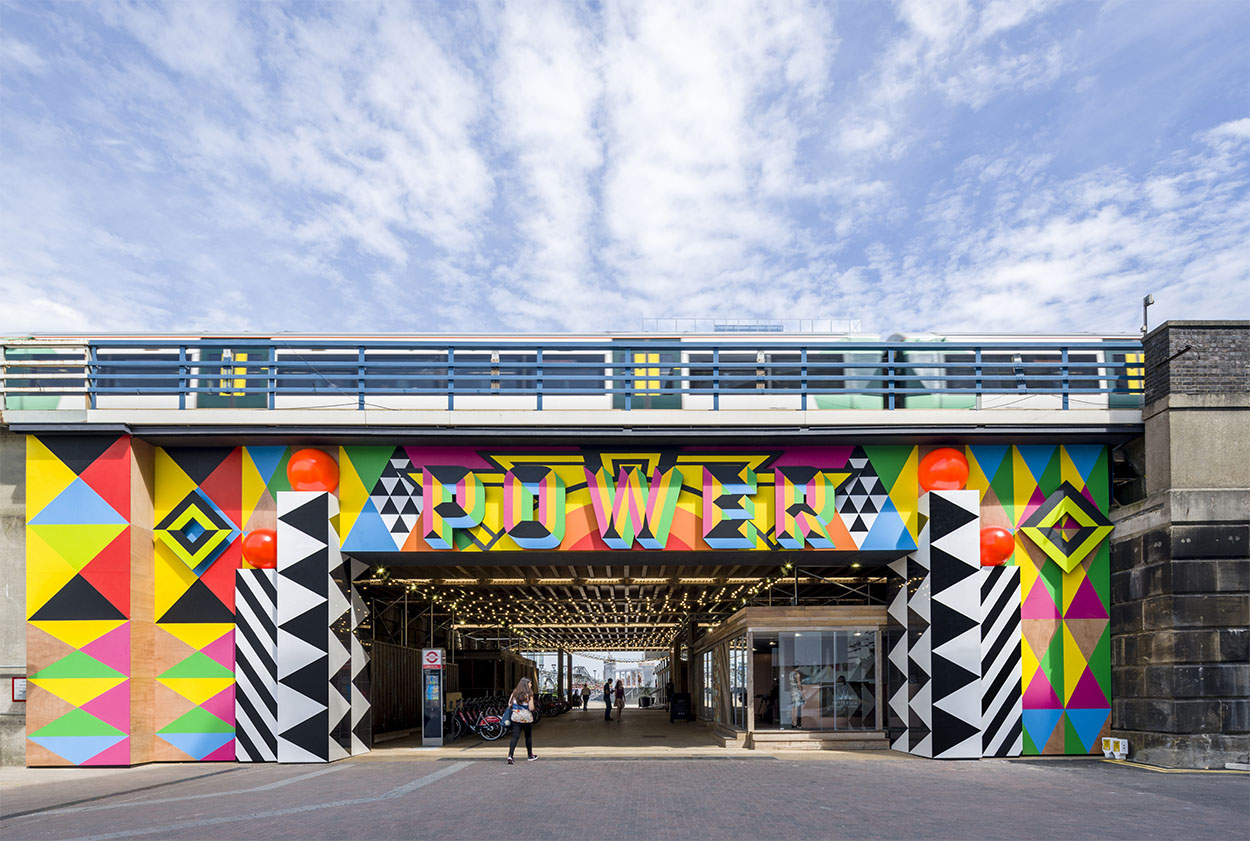 A landmark installation for Battersea Power Station, that standouts from the surrounding urban architecture, a celebration of times gone by and to mark the beginning of a new era. Power was Morag’s first permanent outside public art installation situated next to the river Thames London.

"It was a wonderful commission for me as there were so many recent historic references in this area that I wanted to embrace as they were akin to the aesthetic of my work. The Battersea Pleasure Gardens, I have been captivated by the Festival of Britain 1951 since I was very small as it was always talked about in our family home as a time of change and optimism, a feast of colour and enjoyment (my uncle Clarence Myerscough won the award for music at the Festival of Britain).

As the work progressed, I did not want to make a piece that looked back but to make a new optimistic piece that embraced the past but ultimately looked to the future. I felt strongly that I wanted to incorporate the word ‘POWER’ – ENERGY – INSPIRE – STRENGTH – DRIVE – DYNAMISM – INFLUENCE, summing up all I was trying to achieve in making this piece.” says Morag

Situated at Grosvenor Arch, the entrance to Circus West Village at Battersea Power Station, the installation, called Power, acts as a bold, colourful welcome to visitors and passersby and a celebration of the iconic building that has inspired the work. Marking a new era in its history, the commission is a bold statement by Battersea Power Station of its commitment to inject more culture into this part of London.

Built in the 1930s, Battersea Power Station was the major site of electricity production up until 1983 and a beacon of Britain’s optimism about the future. Morag saw the original art deco doors from the Directors Board Room and was inspired by how the production of electricity was depicted and how at the time it was key to the country’s future, epitomizing the optimism of 1920s’ and 1930s’ society in the production of energy.

Made from marine plywood panels and hand painted by Morag and her small team of painters in her studio. Using her eye-popping colour palette that stands out from its surroundings and can be seen from across the other side of the River Thames.

David Twohig, Head of Design at Battersea Power Station, 2017 said: “Morag’s artwork is a clear and bold statement which demonstrates not only our commitment to enlivening this part of London through art and design, but also that we are open. The first shops and restaurants at Circus West Village have now opened their doors to the public. The artwork takes pride of place at the entrance to the neighbourhood and is the first in a series of public sculptures to be unveiled as part of our vision to activate this space.”

Painting of structure
Morag Myerscough &
a small team in her studio 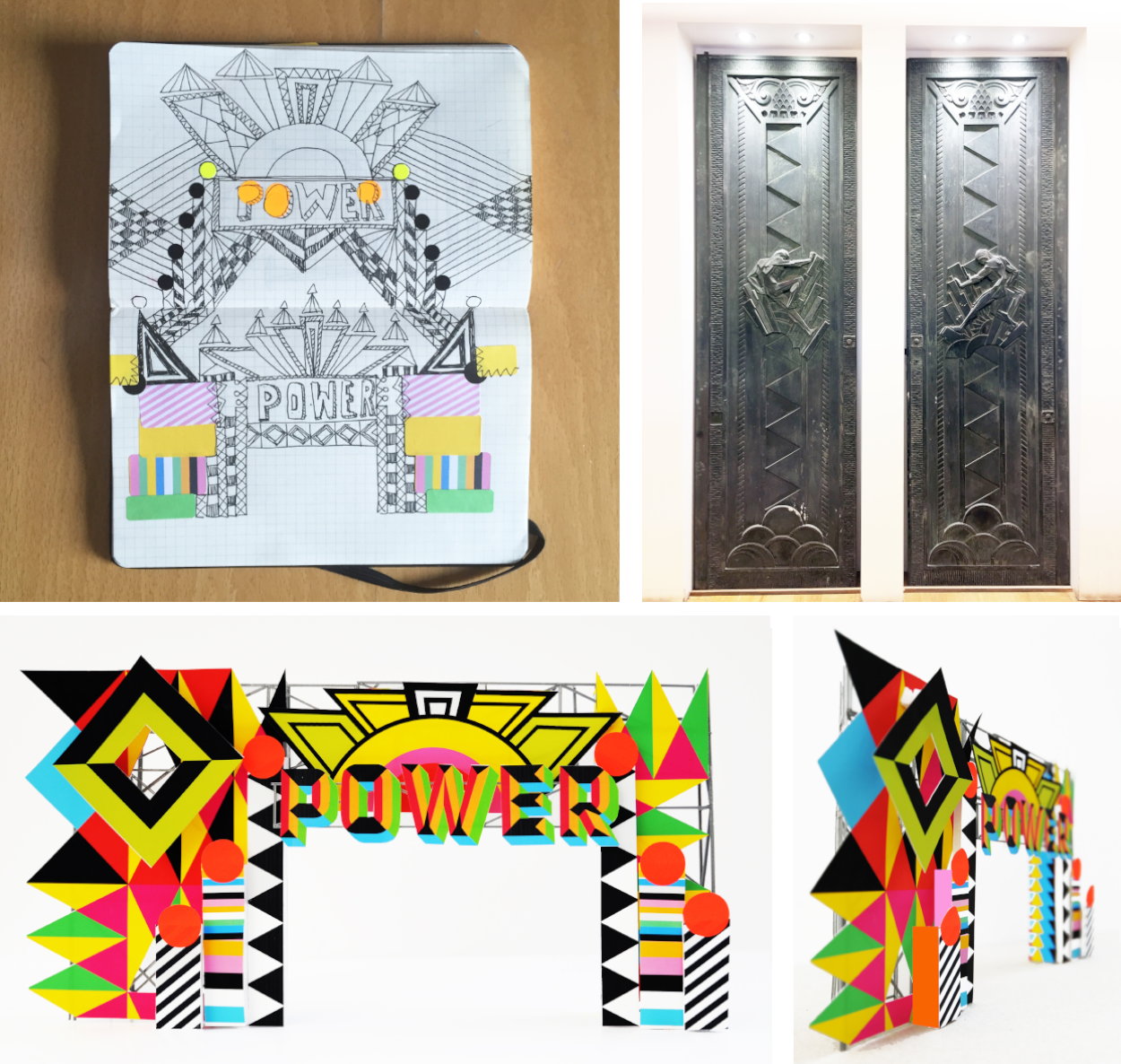 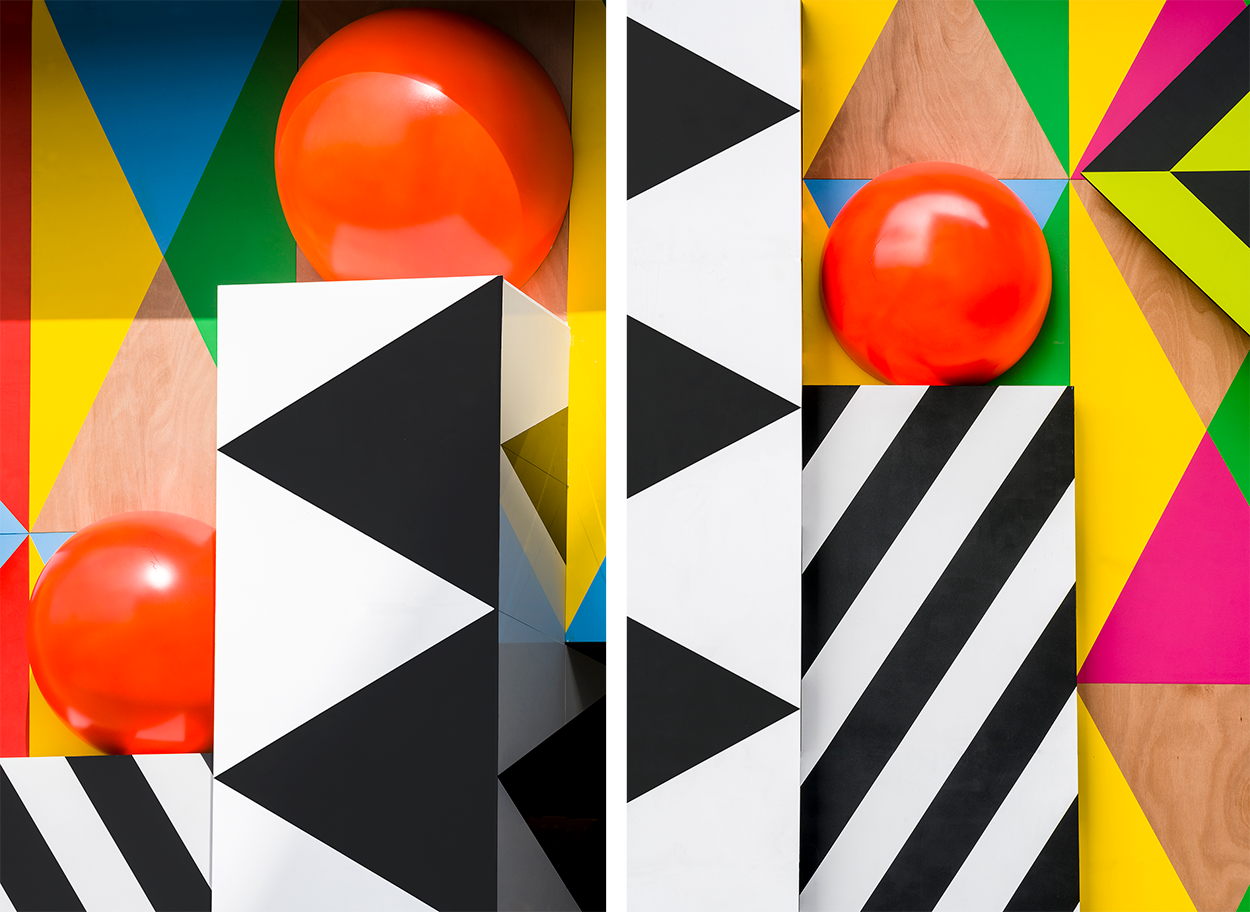 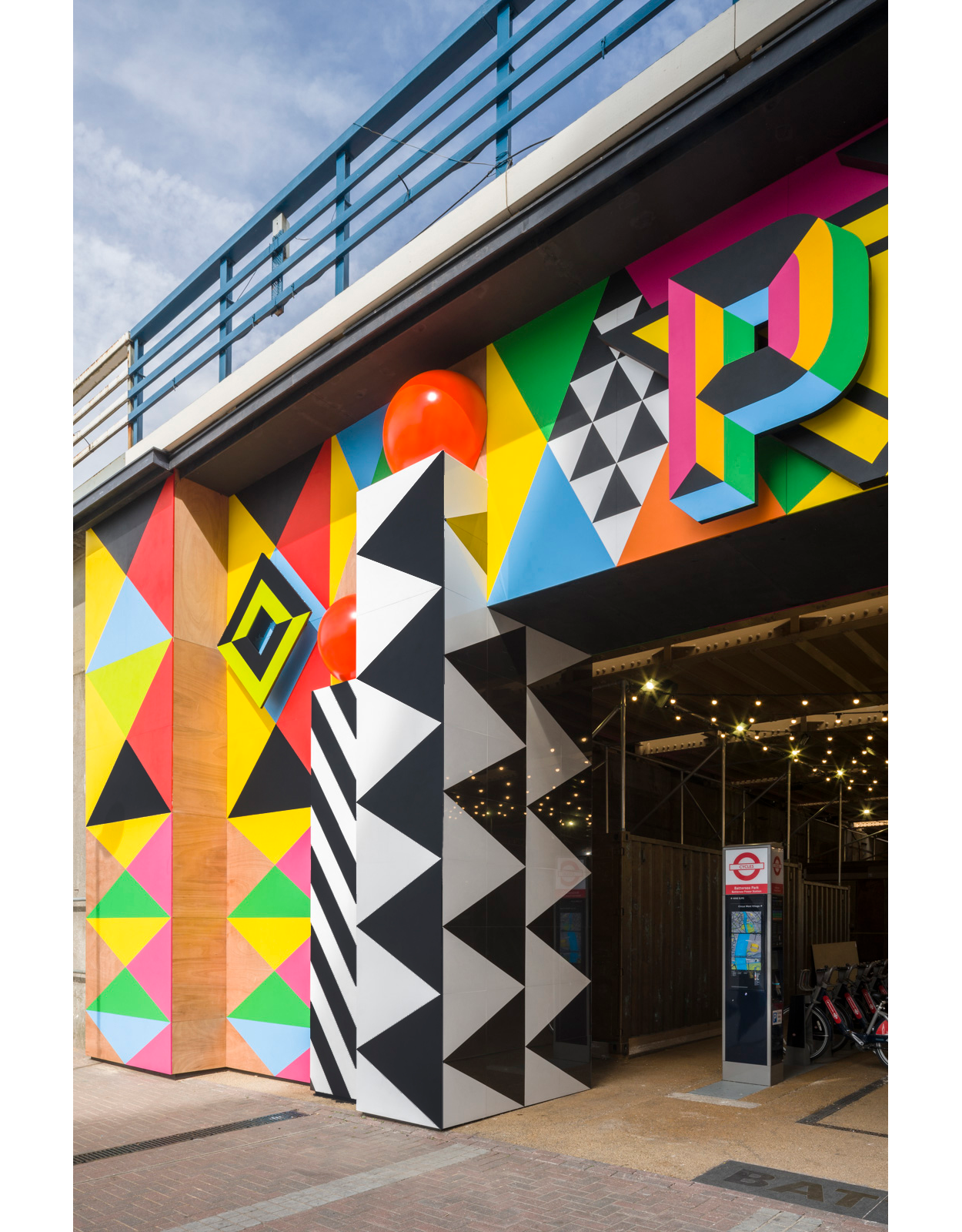 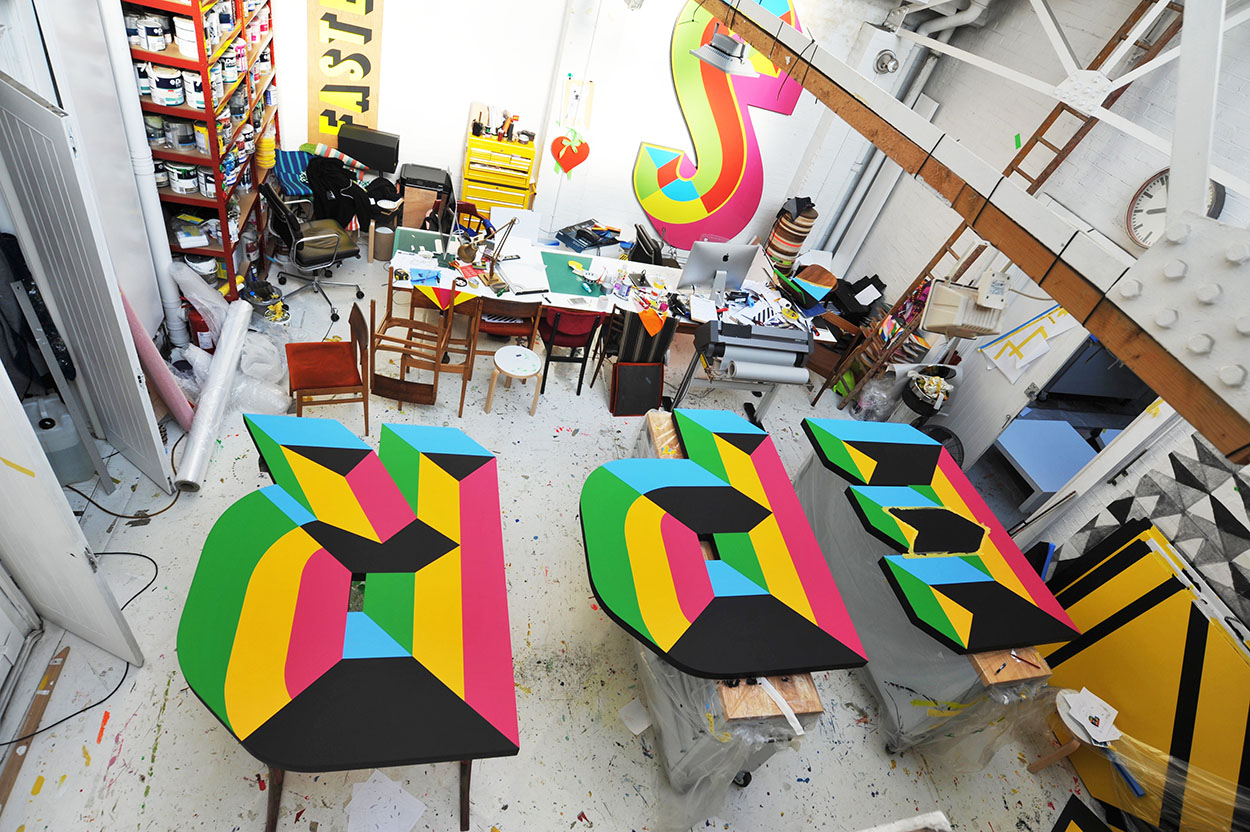 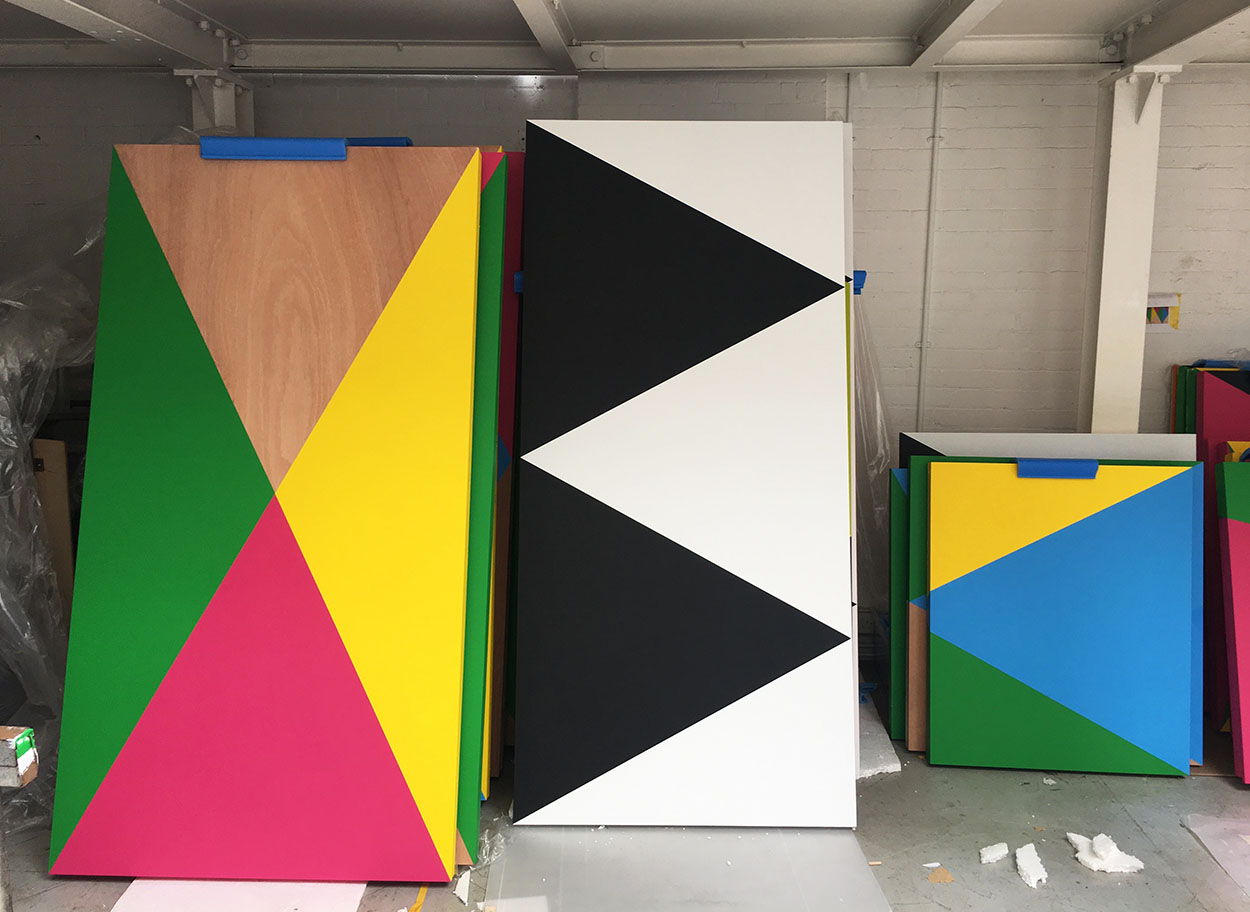