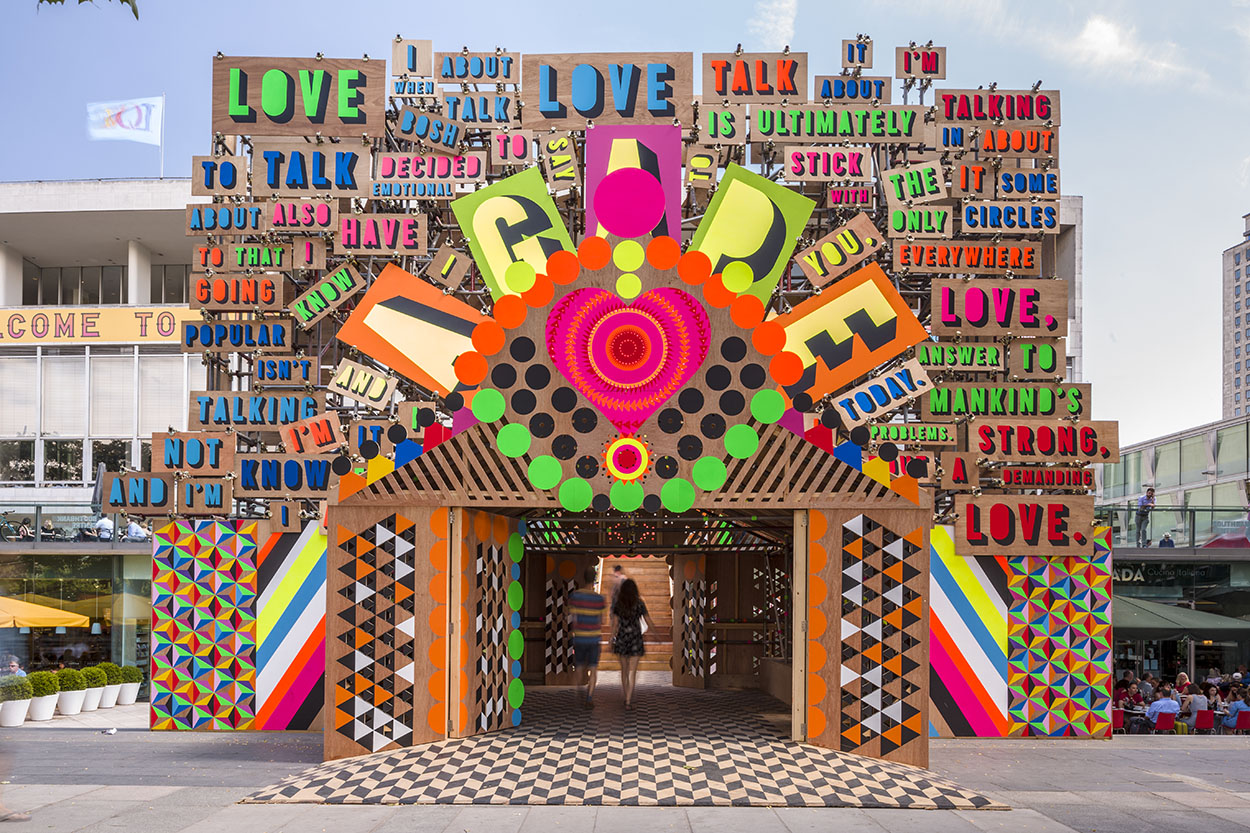 "Love is the most emotive subject and to be asked to consider how to express Agape, one of the 7 types of Love was hugely challenging and thought provoking. Agape, the Love of humanity felt perfect for me and at the beginning easy, 'Love' I thought, we all know about it, it's all around us, we have felt it and therefore we should know how to express it in our work. But when I started thinking about it and all the clichés how do you do something that is new?." Morag

The Temple of Agape, a temporary installation commissioned by the Southbank Centre for their summer 'Festival of Love'. The Temple of Agape is a celebration of the love of humanity, one of the seven Ancient Greek themes of love represented at the Festival. Southbank Centre’s summer festival  showcased love in all its forms. A series of weekends explored the seven Ancient Greek themes of love through an array of workshops, performances and installations. The seven ancient themes: Agape, Storge, Pragma, Philia, Philautia, Eros & Ludos. The Finale weekend, was the Big Wedding Weekend, inspired by Agape — the love of humanity. To celebrate the year 2014 in which same-sex marriage became legal, all couples, gay or straight, young or old, were invited to marry or renew vows on the stage of the iconic Royal Festival Hall.

The Agape installation was inspired by what Martin Luther King said about love, "I have decided to stick with Love". So they asked the artists to incorporate these words into their Temple in whatever way they wanted.

"We have travelled widely and experienced many types of places, building a temple of Love felt right, making a place for joy and noise as well as quiet contemplation." says Morag

The temple developed very quickly from the initial sketch Morag made on a train.

The Agape procession begins with a neon ribboned 60m canopied series of love benches which lead to the entrance of the temple. The visitor can then journey through or stop and sit in the dappled lit temple and then proceed up the flight of stairs festooned with banners and signs that form a joyful parade to the next level of the Southbank Centre. The installation creates the chance for visitors to experience new views and a new entrance to the Royal Festival Hall balcony for the duration of the festival.

The Temple stands proud like a peacock with its giant Martin Luther King quote, expressing the power of love to the world. Inside its heart is calm and dappled with light for contemplating complex emotions, a place that can transform with Love expressed within.

The temple stands 8m high and 10.5m wide. Made from a scaffold structure, supporting hundreds of words and clad with hand-painted exterior ply. Over 300 wooden panels of varying sizes were painted in Morag’s studio other a three week period with the help of two assistants, Lizzie Toole & Kathryn Cross and a group of great volunteers who gave their time unconditionally.

"Working on the project has reinforced for us that love in all its guises is not simple. At the same time, when you are in love, it can be the purest and simplest place to be." Morag says

Location
Southbank, in front of the
Festival Hall and the river walk.
Queenswalk, Southbank, London, UK

Project Legacy
Scaffolding was hired.
Morag has all the panels
in storage and has reused
pieces for various projects 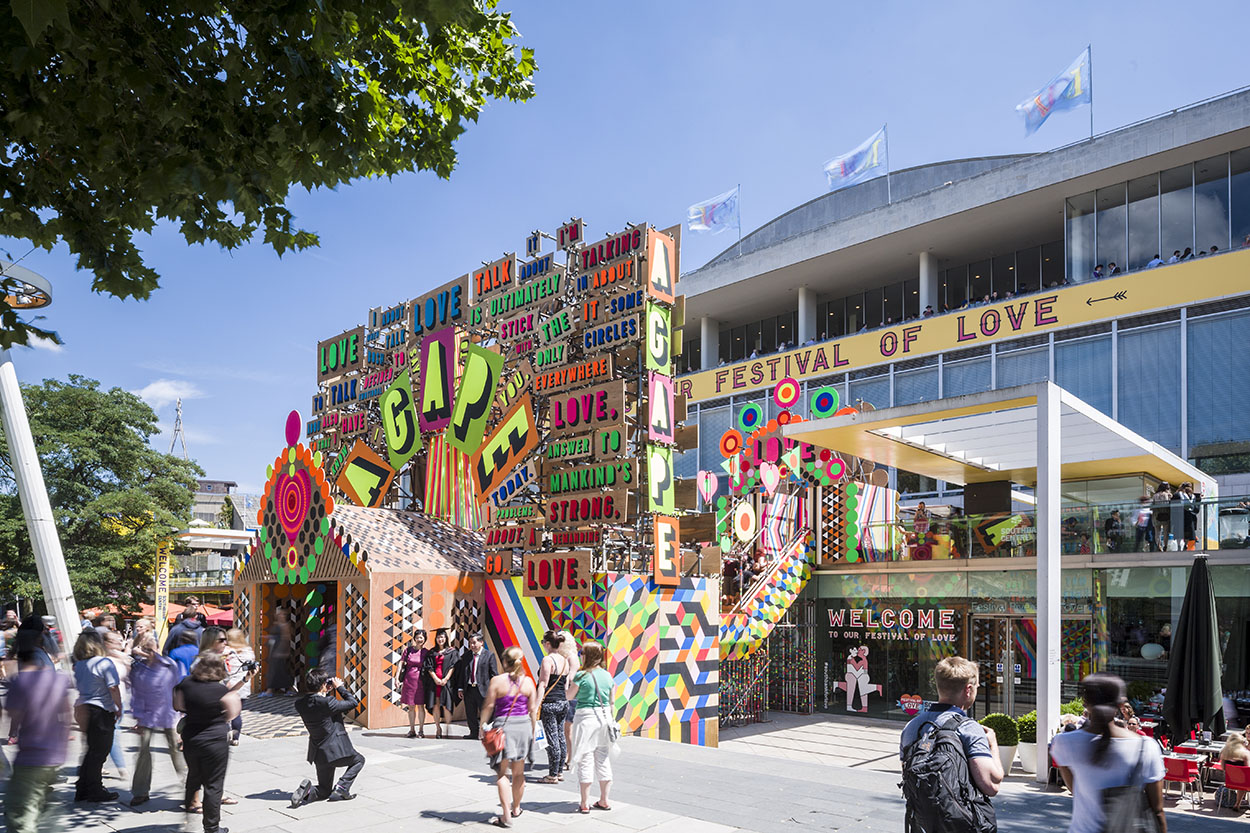 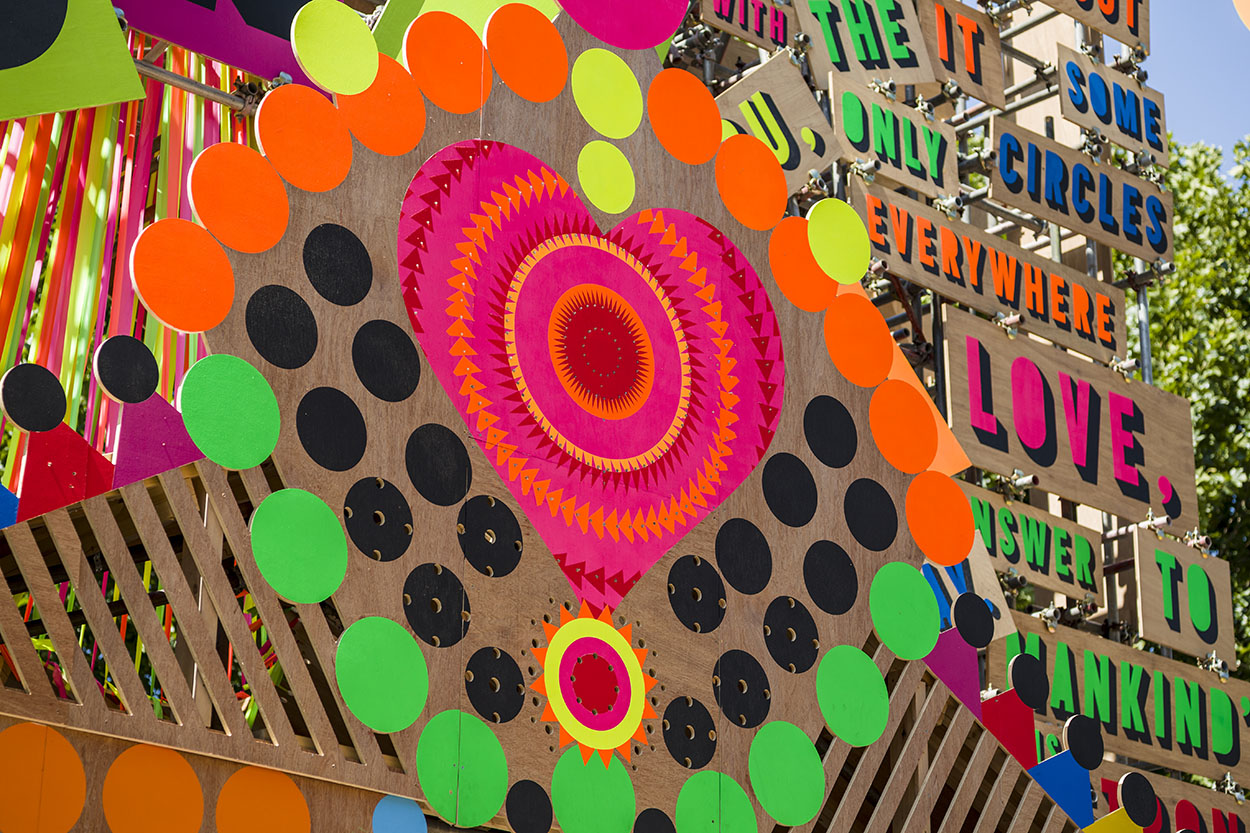 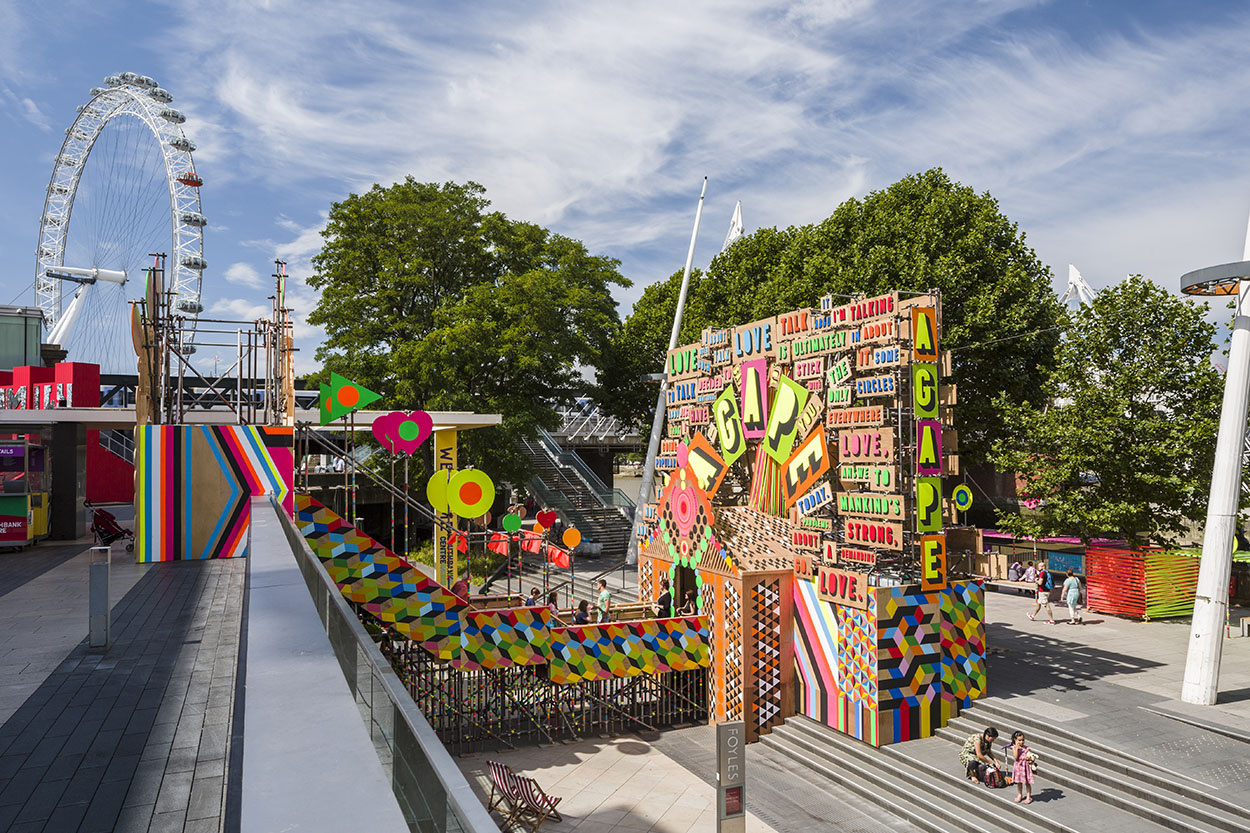 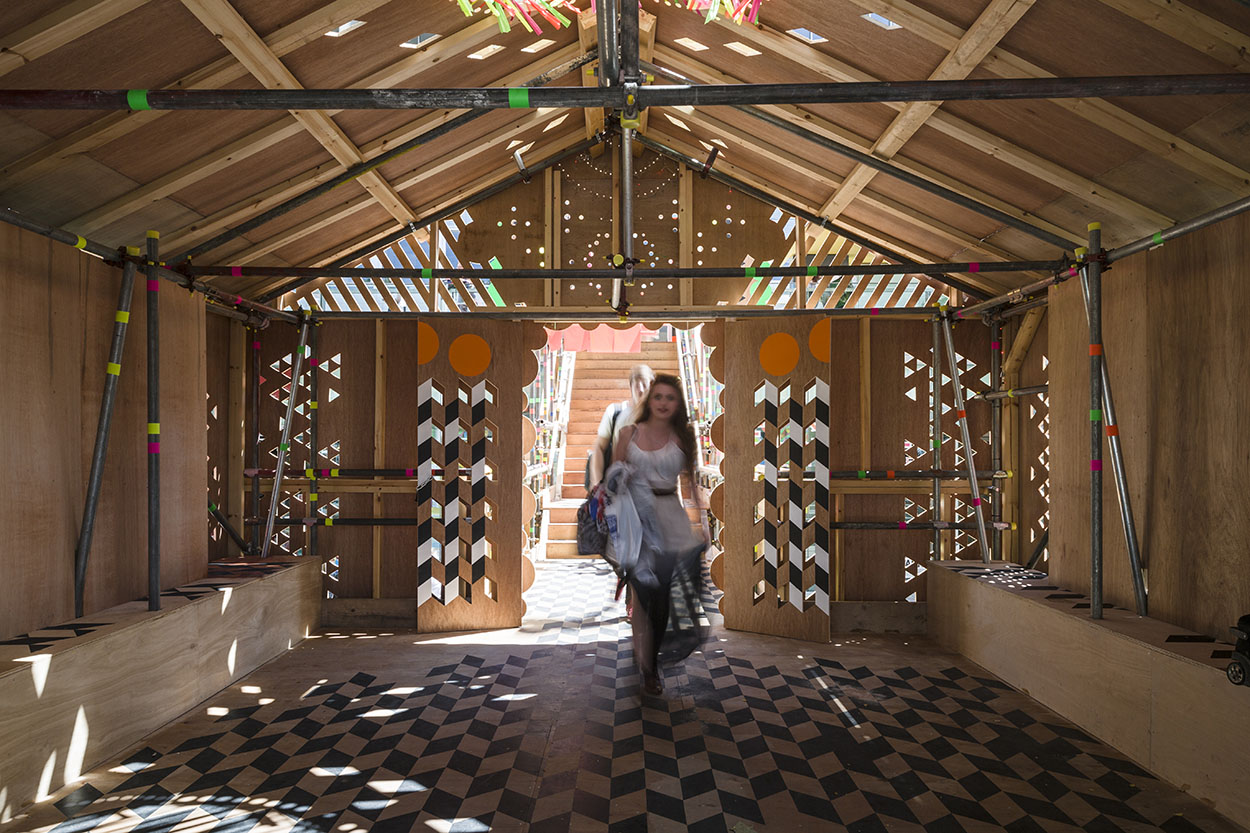 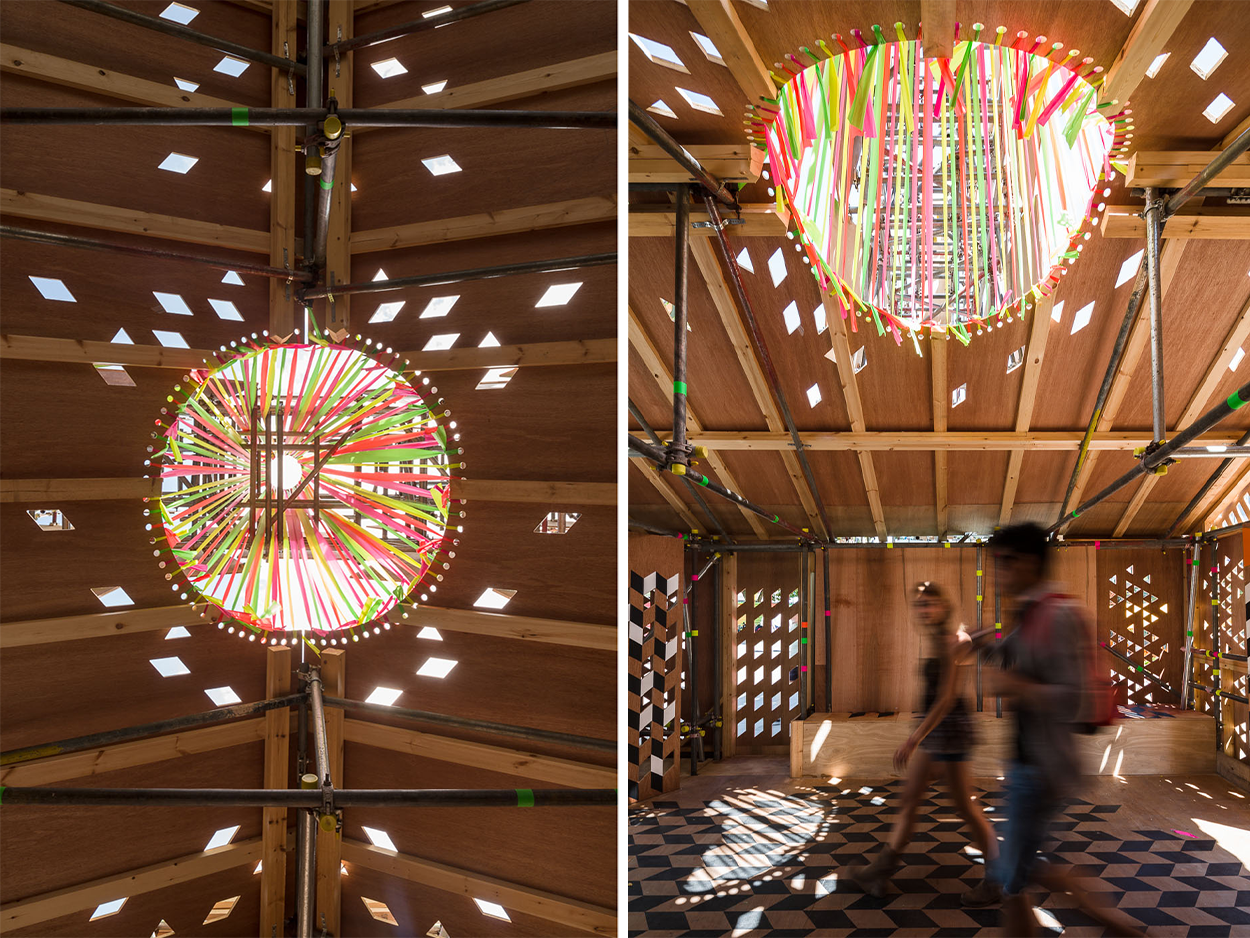 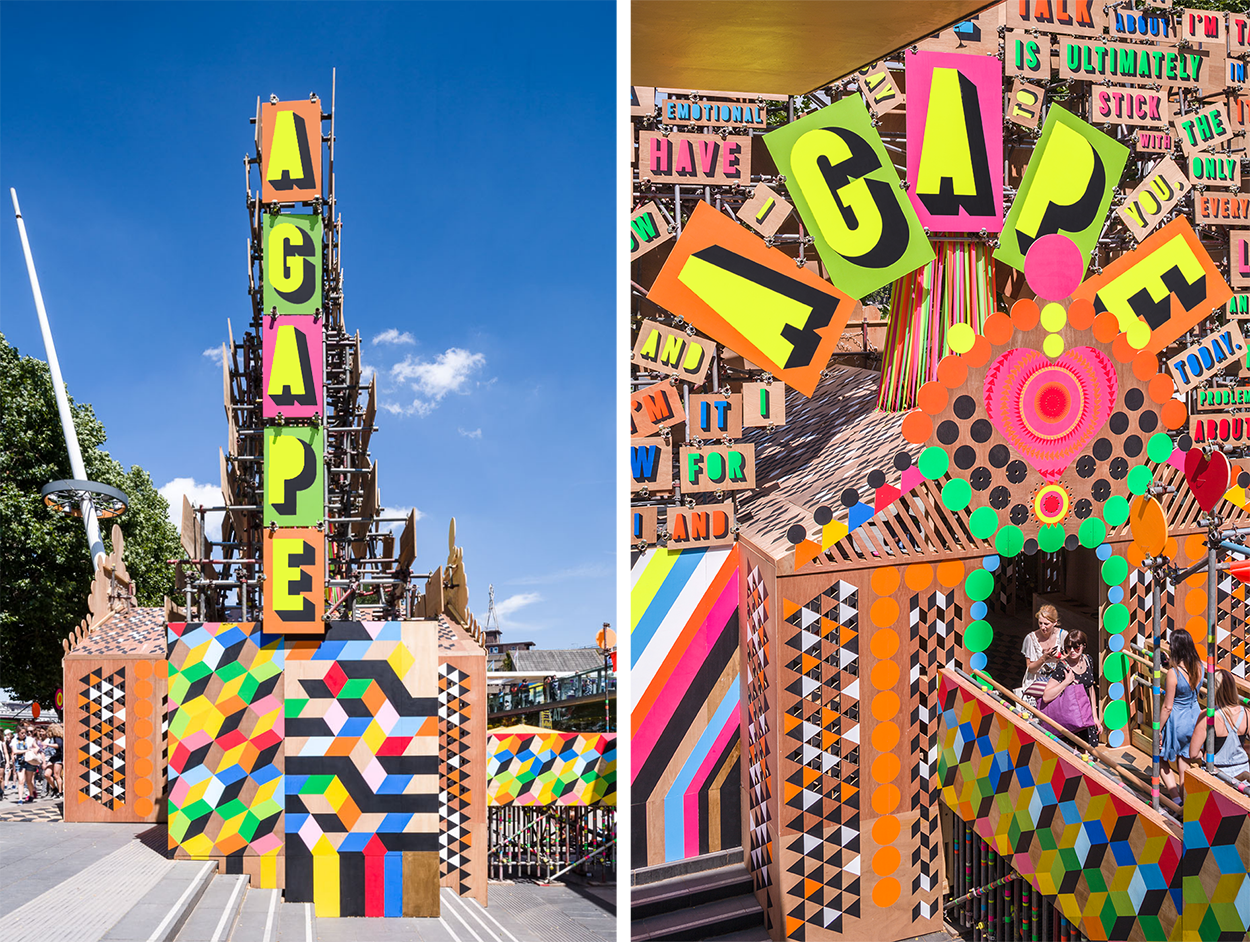 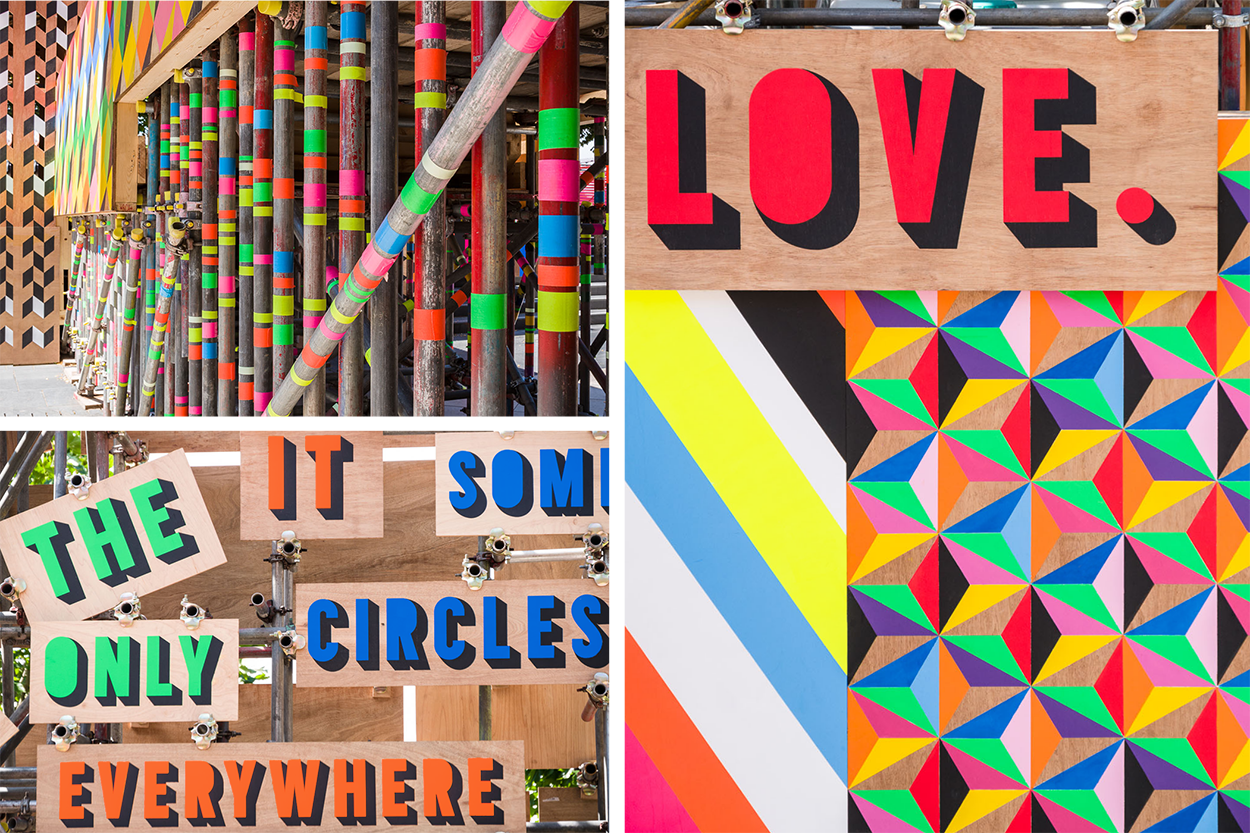 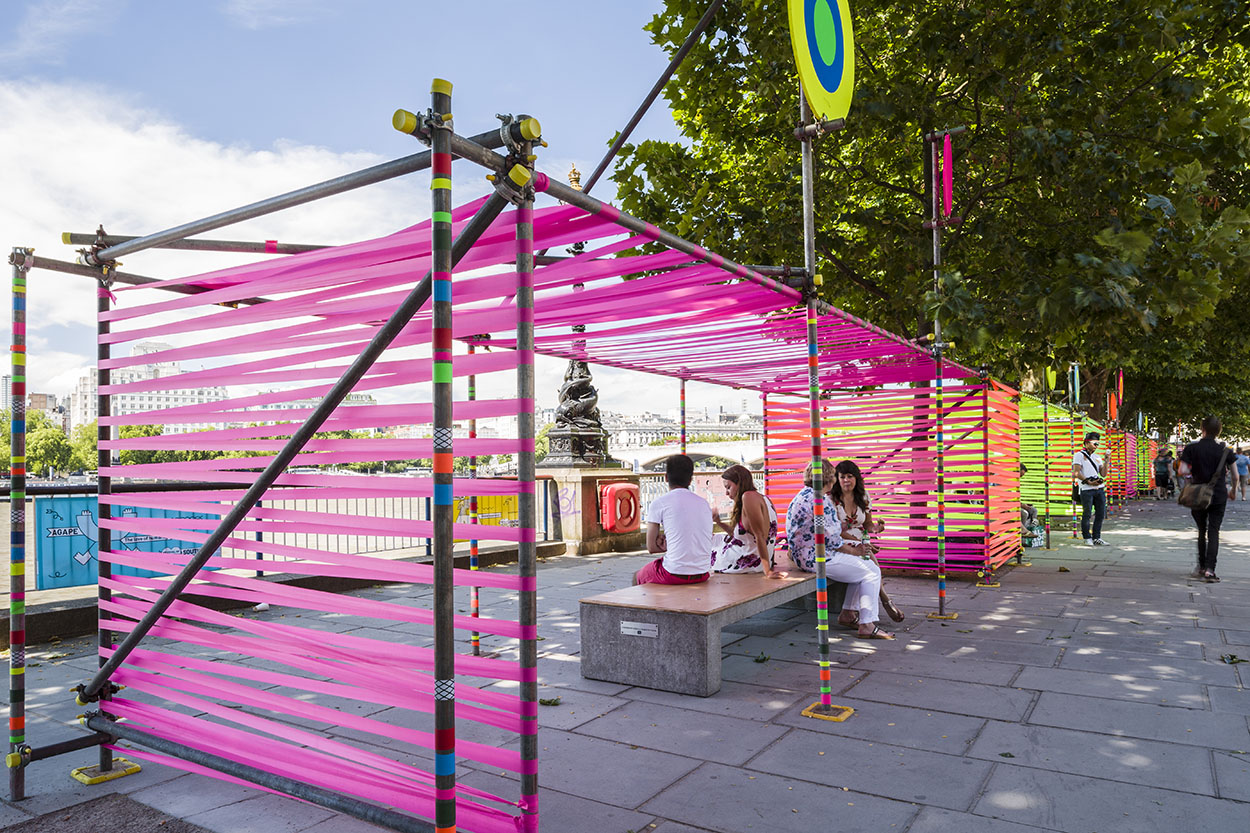 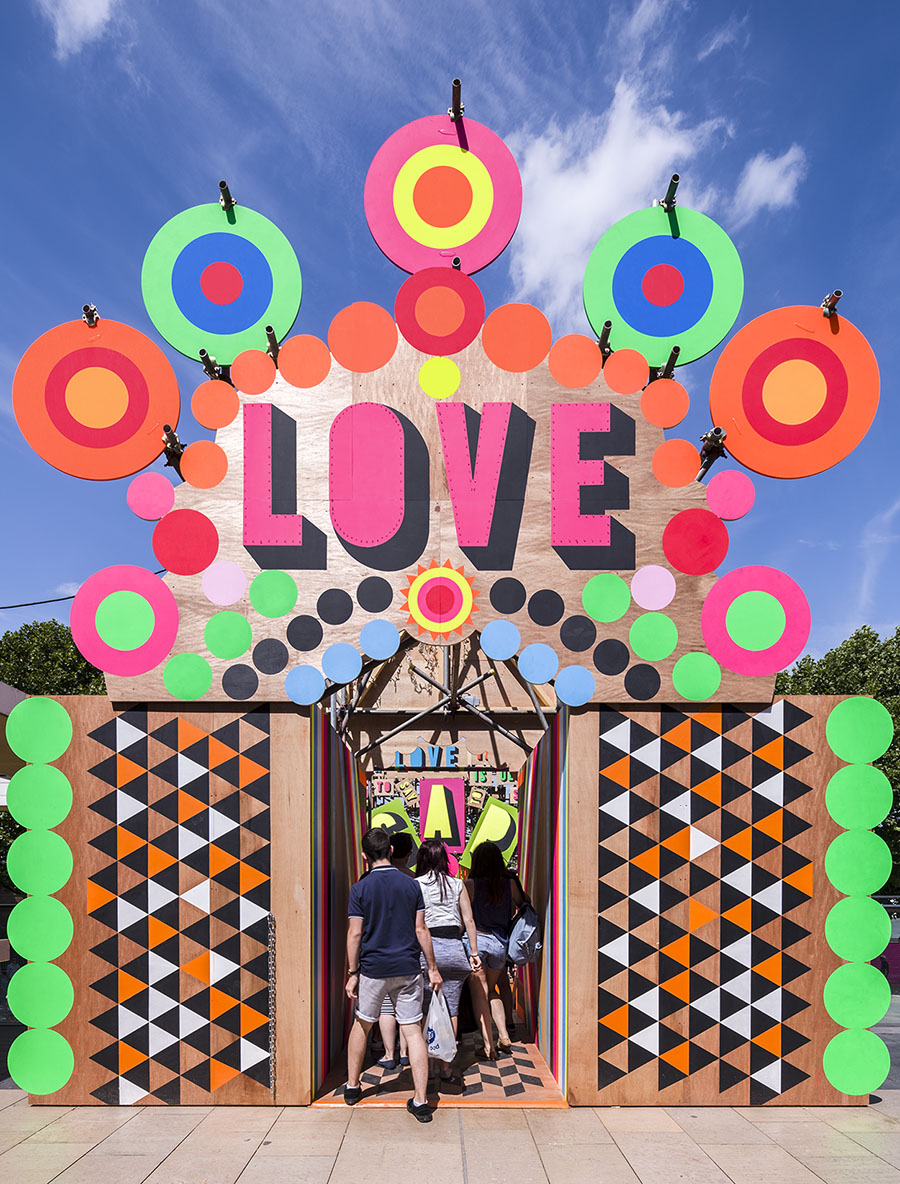 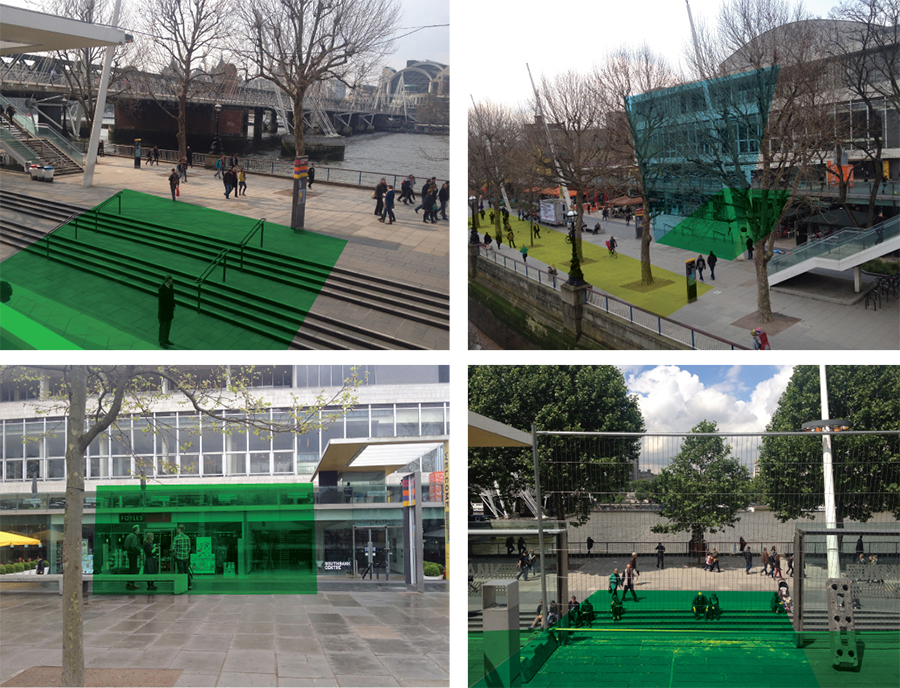 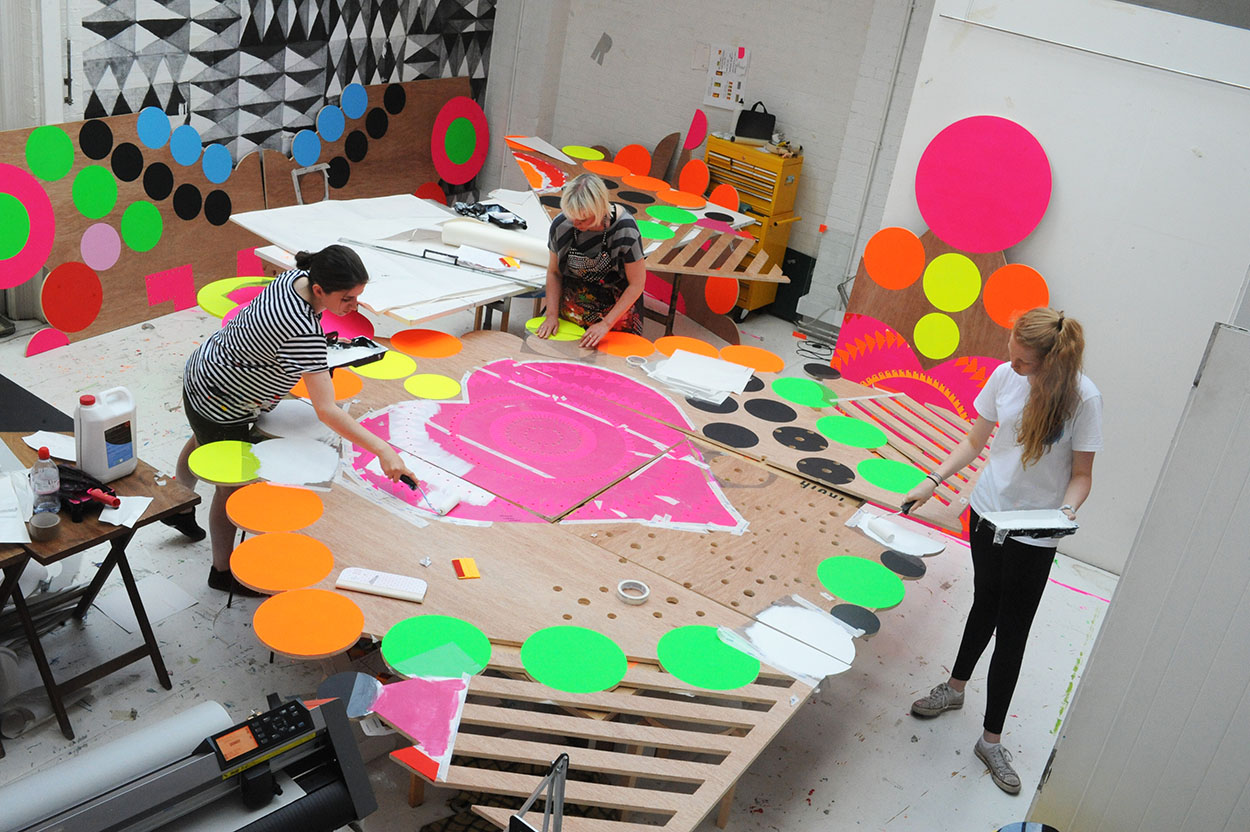 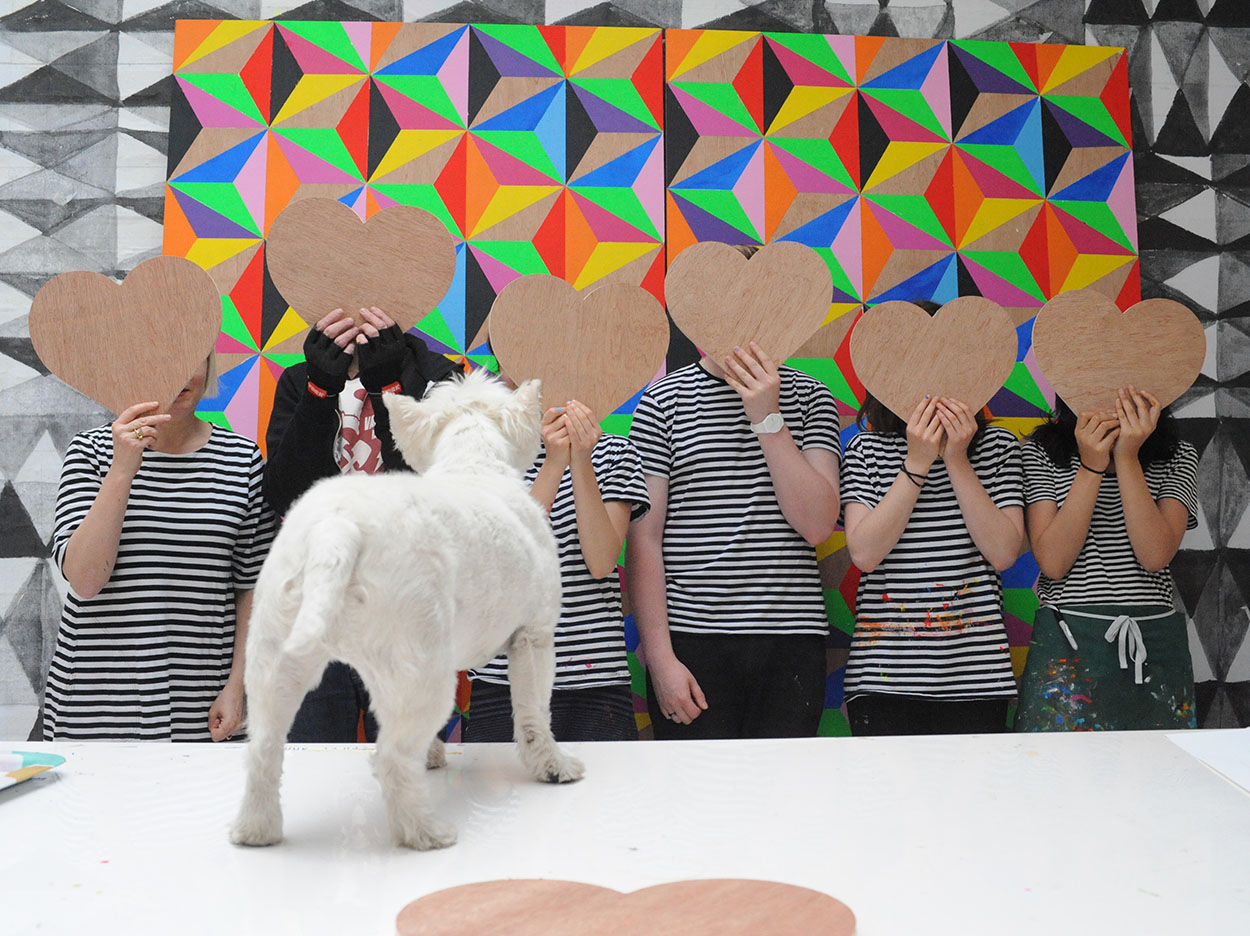 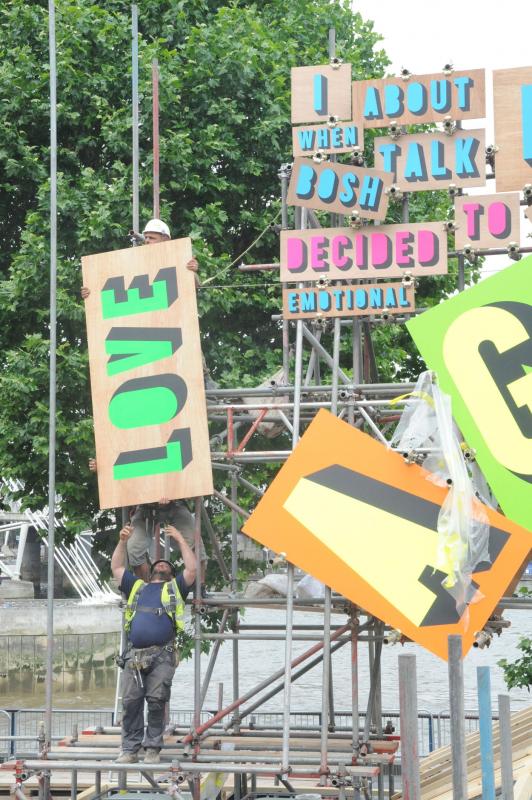 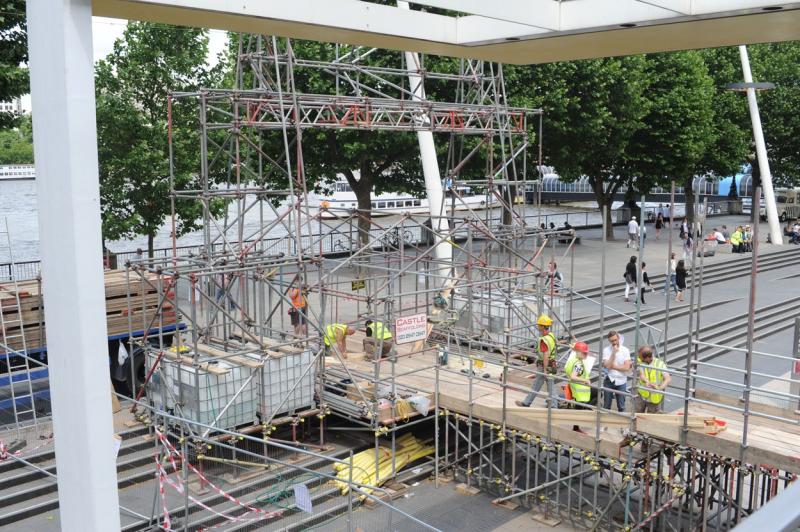 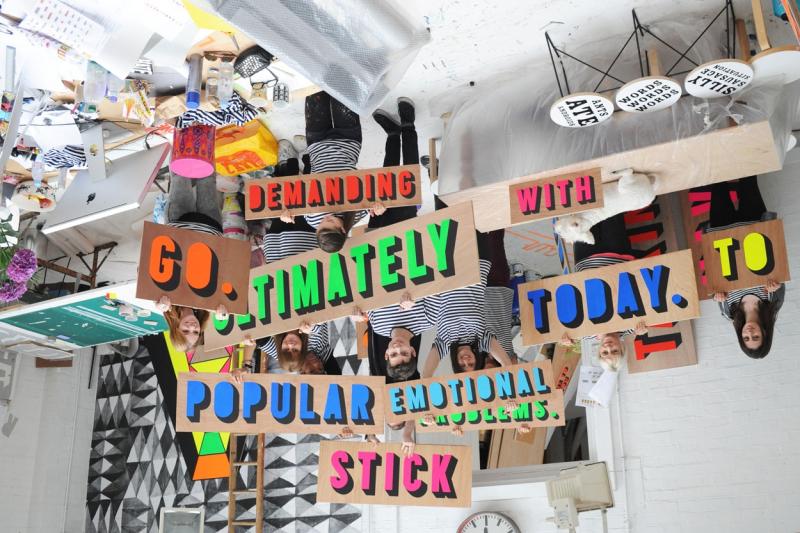 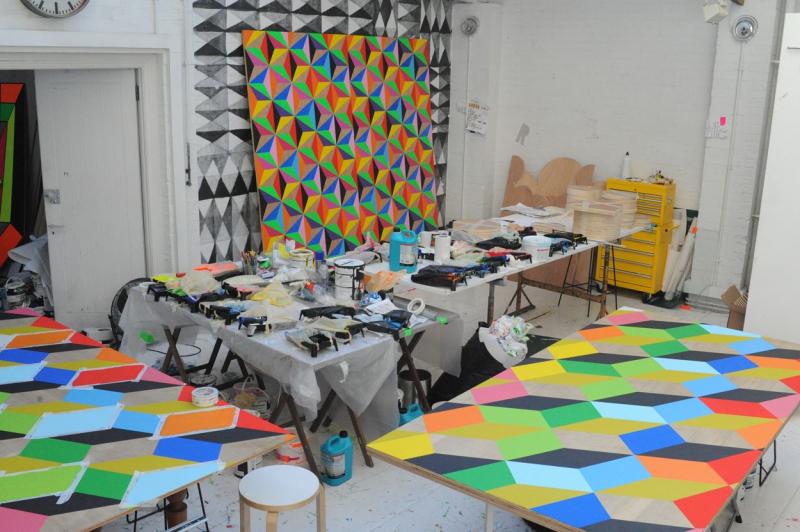 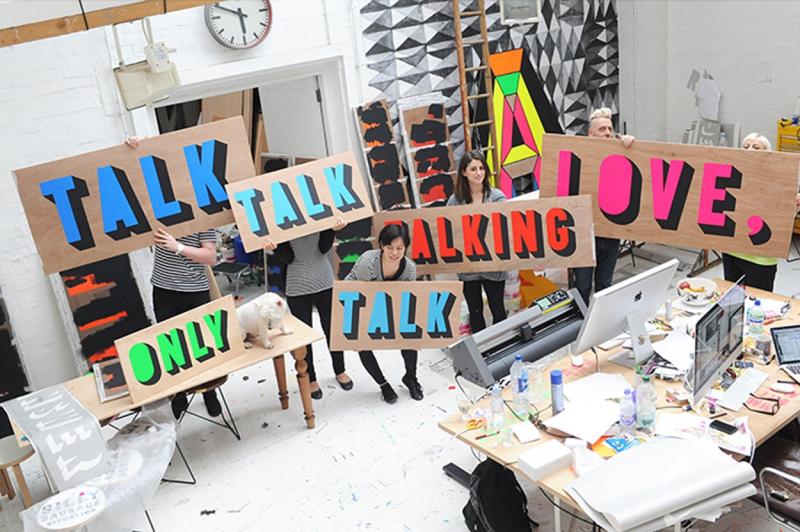 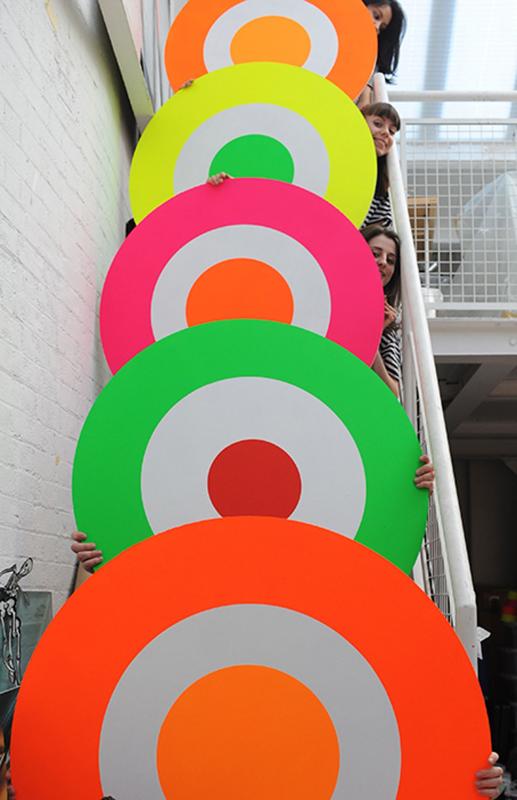 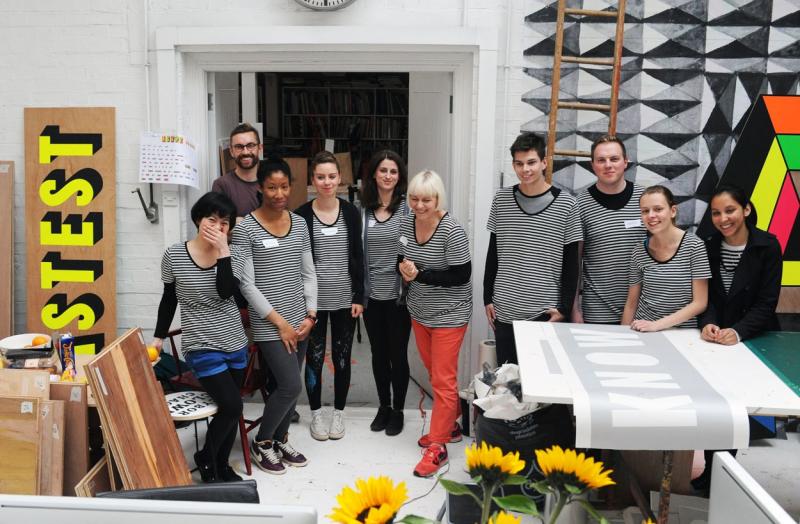 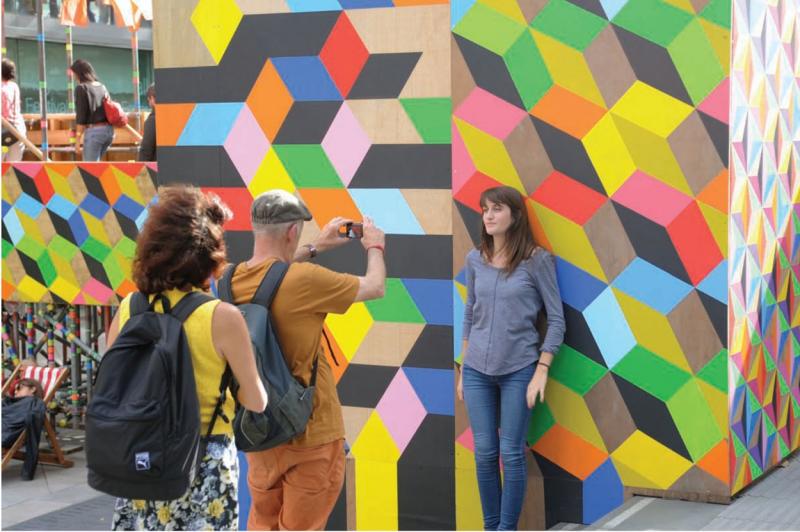 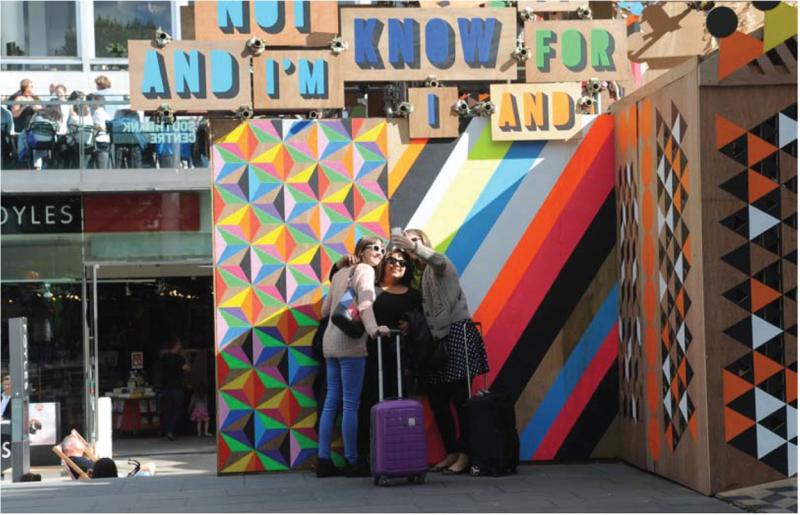 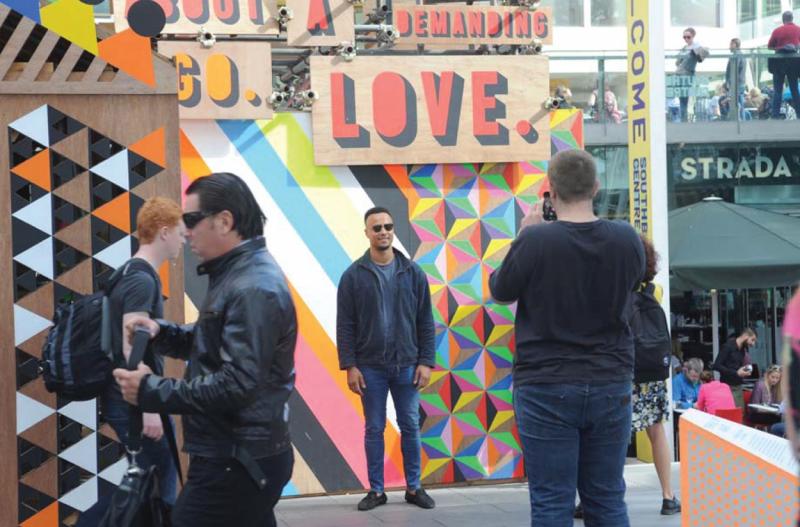