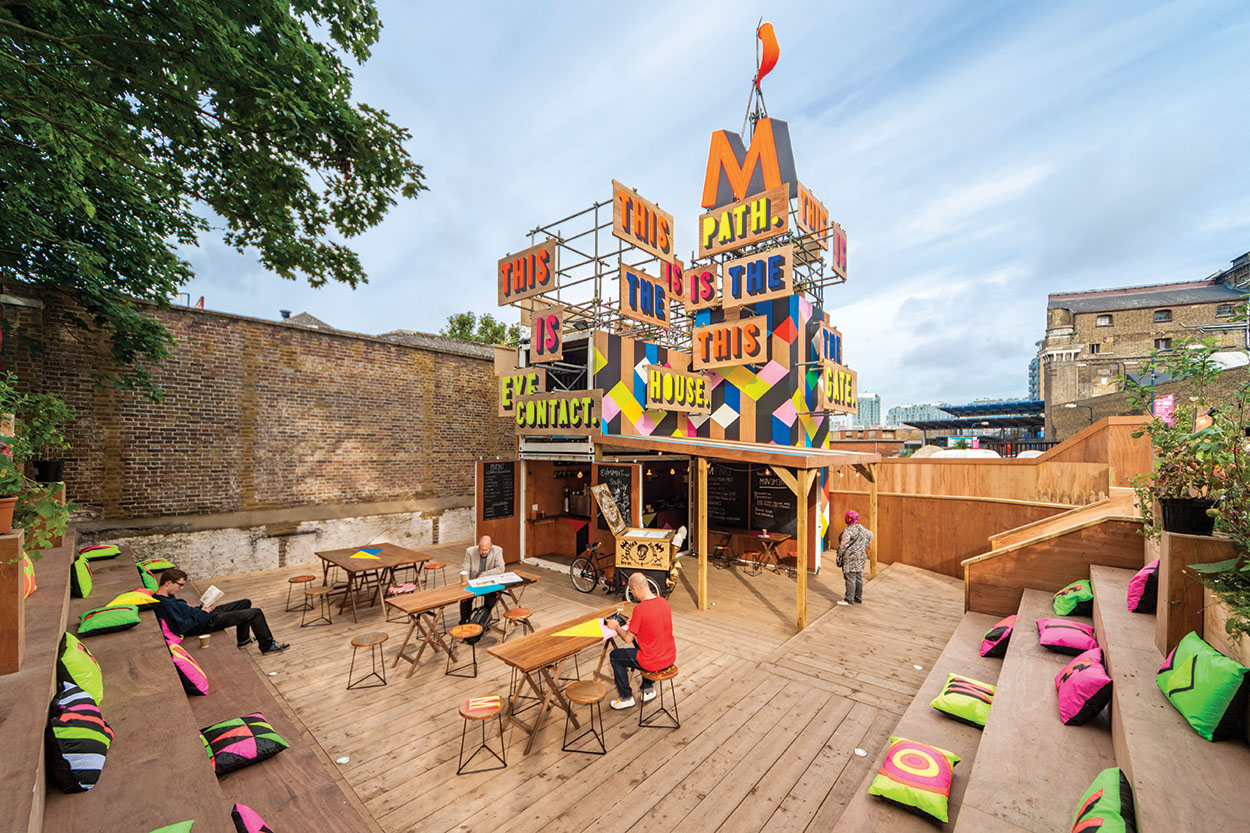 Built from scratch in just sixteen days to coincide with the opening of The Olympics (the developers thought it important that the gateway to the Olympic borough was not an unattractive construction site), the Movement Café was an explosion of colour and type and sits at the centre of an amphitheatre-like space created from the natural level of the site, post-demolition, being 2m below street level.

The Movement Café a temporary café and performance space next to the DLR station in Greenwich, South East London. It sat in a corner of the site of the former Greenwich Industrial Estate that is currently being regenerated by developers, Cathedral Group (now U+I PLC).

It’s the result of a public art collaboration between Myerscough and Olympic Poet and prolific tweeter Lemn Sissay.

"The Movement café is a very big turning point for me, it was my first commission to build a structure and I am so grateful I was trusted to make what I realise I had been waiting to do for the whole of my working career. Times and attitudes had to change and I am so pleased they did."

"Being given the opportunity to make my dream project I then had a block, I think it was all too overwhelming. I had a meeting about my proposal and I made excuses as I felt I had not come up with an approach I wanted to show them, I was given an ultimatum, to get something to show them the next day or they would have to go to someone else."

"I had been discussing tweets with Lemn Sissay. When I got home I read his daily tweet and it just said something to me it lit a spark. In a frenzy I made a model of the structure (shown below), immediately I knew it was right, next morning I sent it to the commissioners and they said 'yes'. Next hurdle was to build it in a very short period of time even though I had not built anything like this before it did not deter me."

The tweet in its entirety was painted on large wooden panels, positioned over the core structure of the building which is covered in an original hand-painted Morag multi-coloured geometric pattern.

The outdoor amphitheatre seating area made a lovely, contemplative, sheltered place of respite for commuters and visitors to Greenwich and several times a week played host to storytelling, poetry reading and acoustic performances. All furniture was made by Morag and Luke Morgan from reclaimed laboratory tops. Cushions are hand sewn from kite fabric. The amphitheatre structure was surrounding by planters and filled with a mixture of perennials and evergreen plants.

The cafe's prominent position at the gateway to one of the most important sites during the Olympic games, presented a unique opportunity to showcase the best of British design talent and creative collaboration.

Sissay had been commissioned by Cathedral to write a poem about Greenwich, which has been set permanently into the road that cuts through the competed site. In 2012, the same poem, Shipping Good, was painted on the hoarding that wraps the site.

Painted with a small team in
Morag's studio

Project Legacy
The scaffolding was hired.
The painted panels were
returned to Morag.
The remaining wood and the
shipping containers
were reused on another
U+I project in Brighton 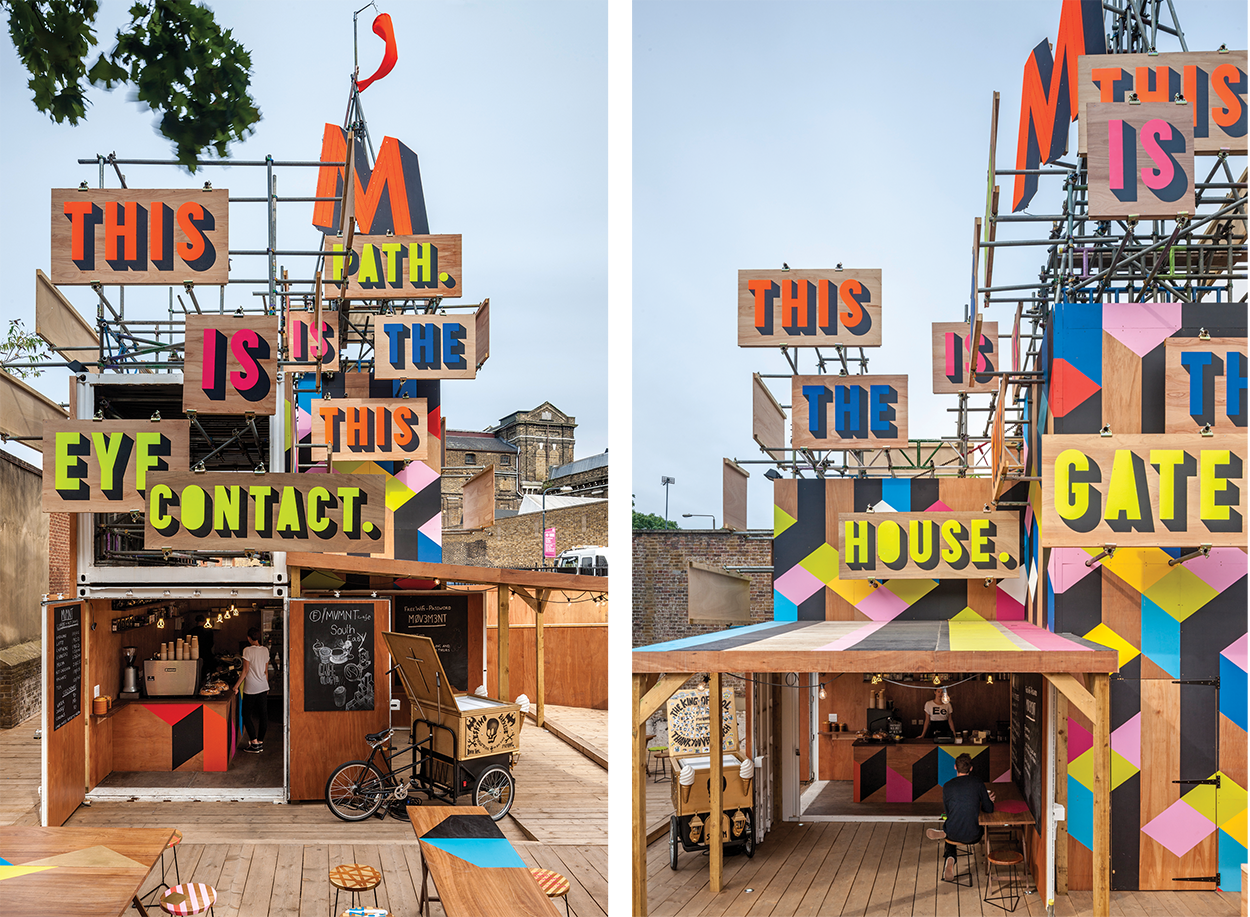 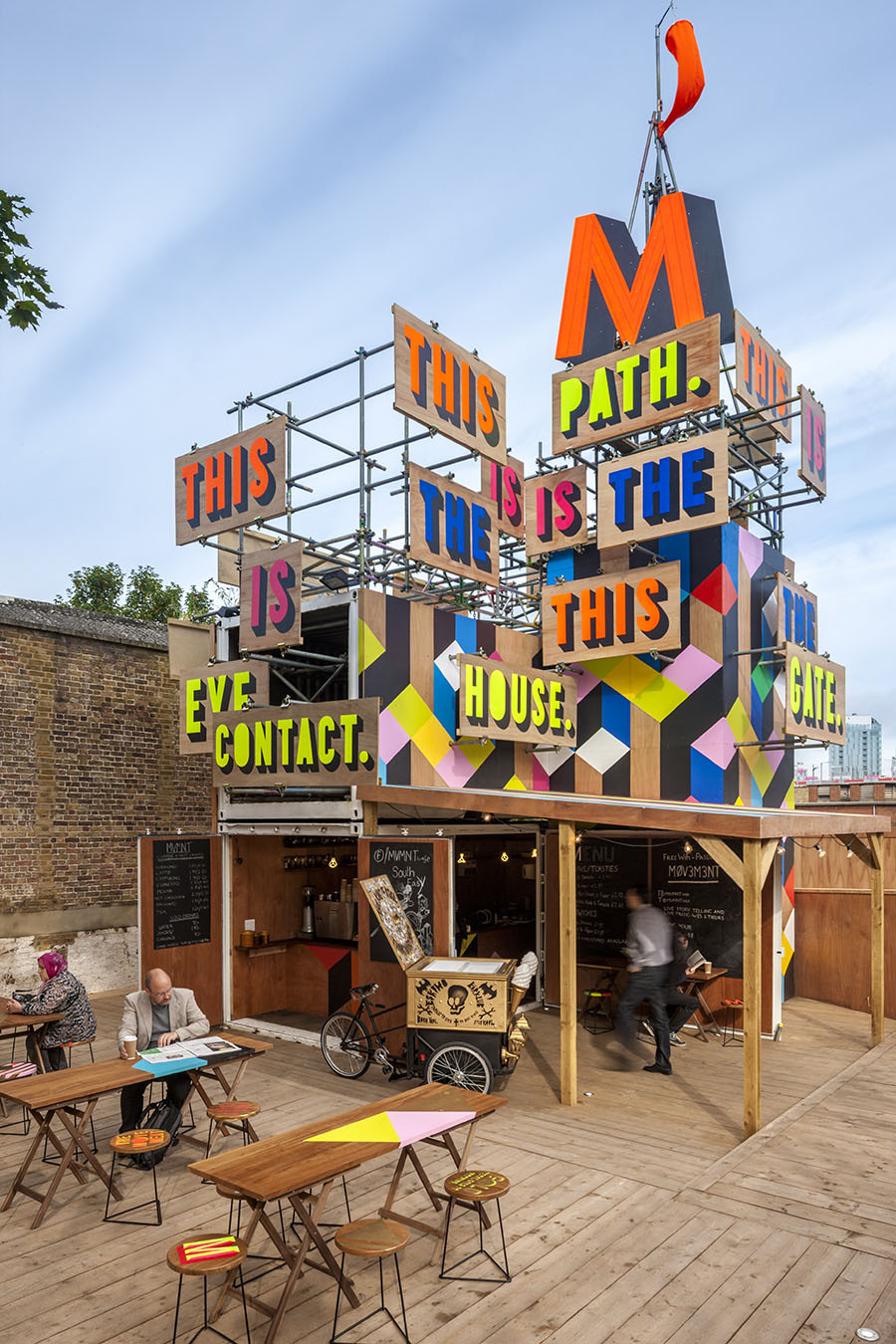 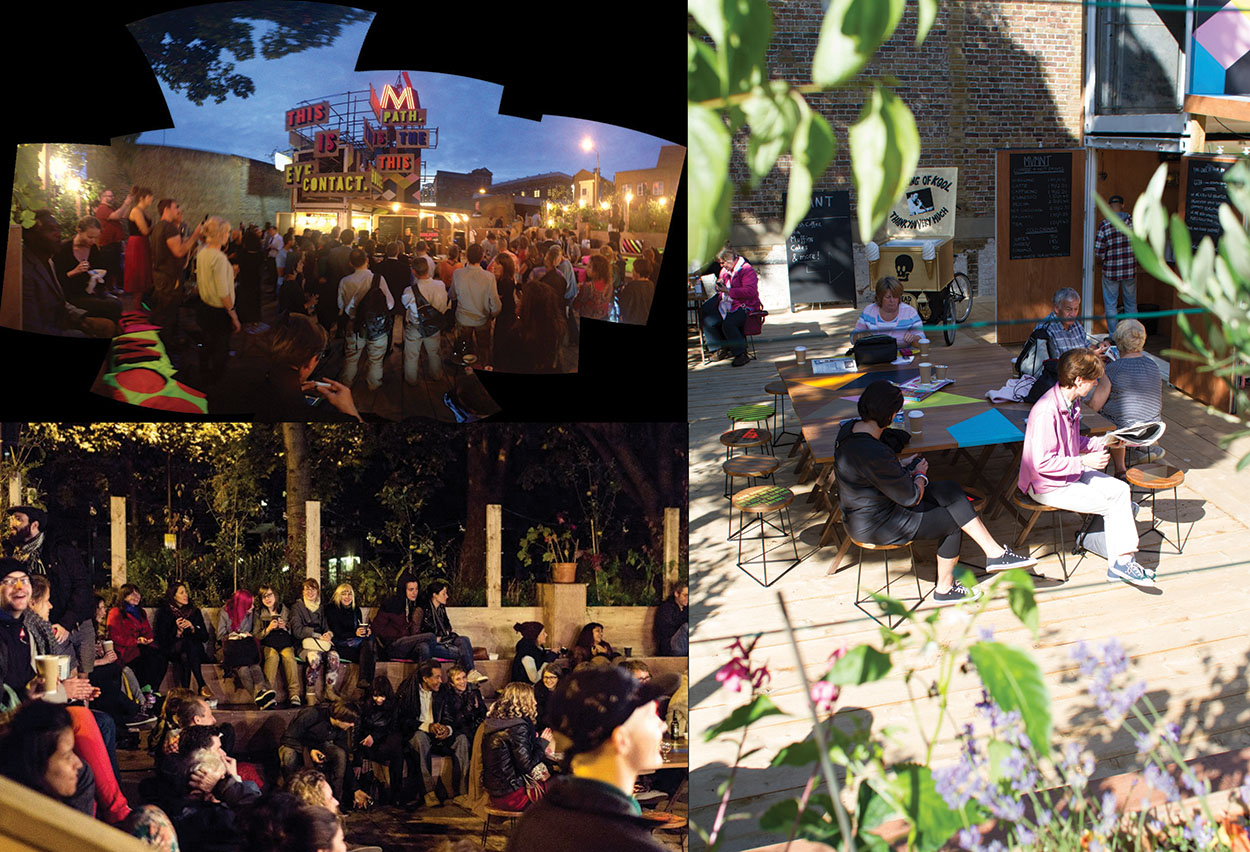 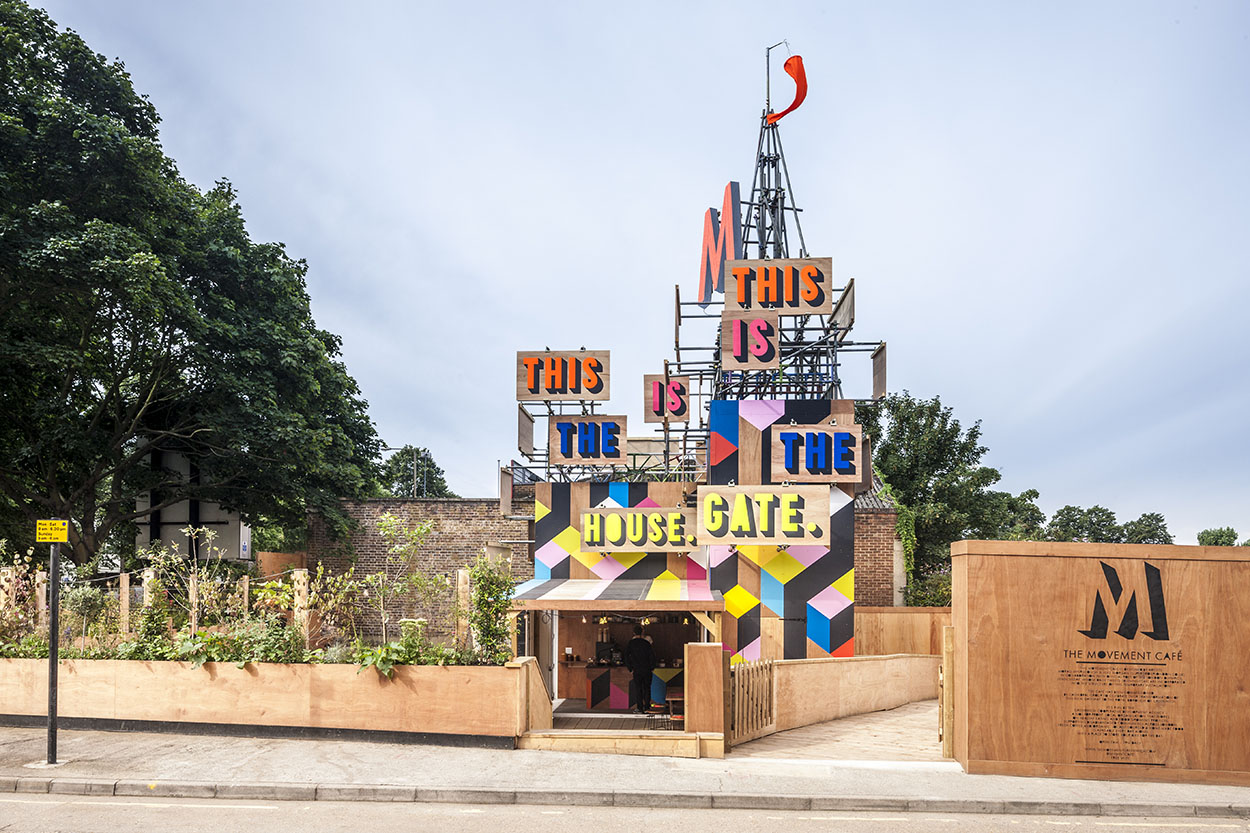 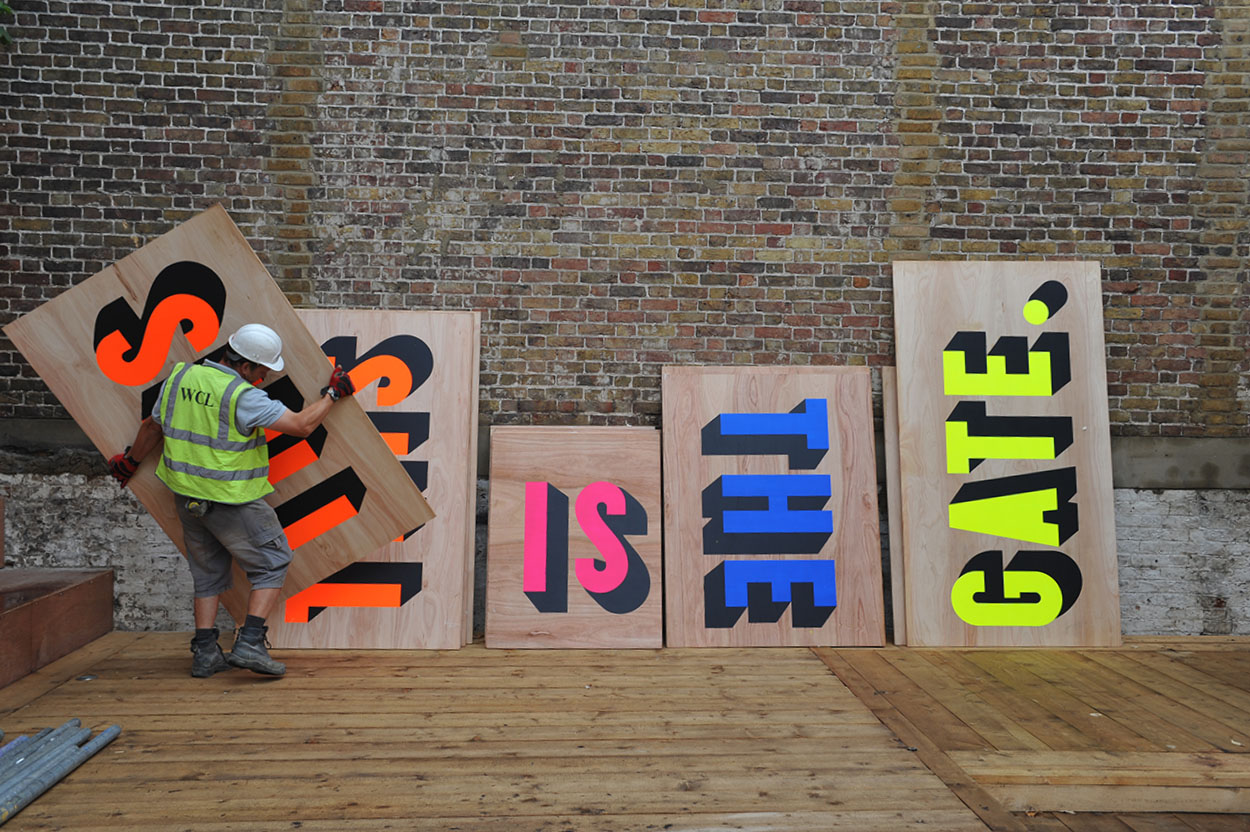 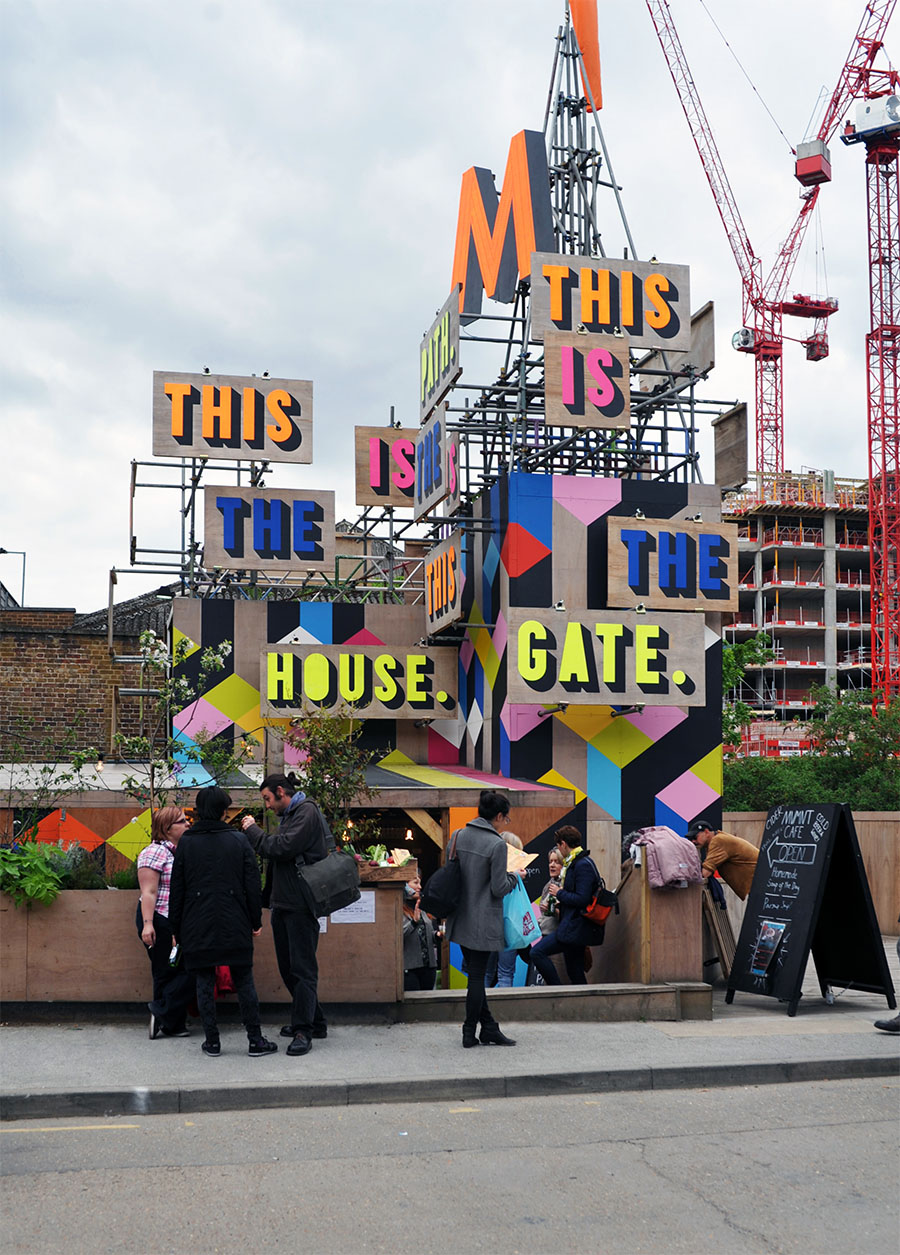